A review of United States of Japan by Peter Tieryas

Looking at the cover of United States of Japan you rapidly see some iconic symbolism, the font for the title has â€œUnitedâ€ in blue, â€œStates ofâ€ in white and â€œJapanâ€ in red. An inversion of the colors of the flag, with the red being reserved for Japan, but obviously tipping its hat to the US flag. The center of the cover is occupied by a massive mech, it’s pauldron emblazoned with a red circle – the rising sun. In the background you can see a metropolis that is flying flags of both the US and Japan, but the Japanese flags outnumber the singular, lonely, US flag.

You might walk away with one of two assumptions from this cover. One, it could be a book about the rise of Japanese entertainment culture in the US; the history of weeaboos so to speak. Alternatively, you could assume that it was a book about the Japanese conquering the US through martial force, bolstered by the unstoppable power of Giant Robots. If you look at the publisherâ€™s tongue in cheek â€œFile Underâ€ it becomes rapidly apparent which of the two is the correct assumption: â€œScience Fiction [ Gamechanger | Area #11 | Robot Wars | Strike Back the Empire].â€ 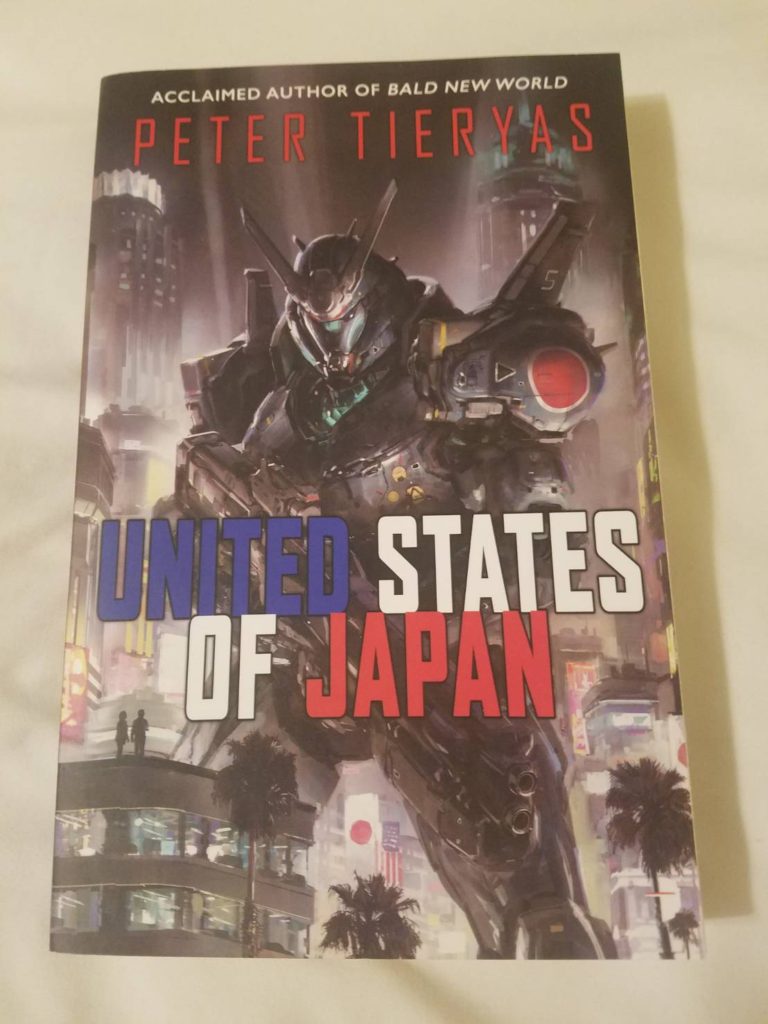 This was good news for me. Basically anyone who has known me for any length of time has heard me say that my life goal is to have my brain transplanted into a giant robot. Those who donâ€™t know me, or the culture I am part of, find that statement a bit creepy. Those who know me a little bit, or are familiar with the culture laugh, because it’s a silly bit of fanboyism. Those who actually know me, find it a bit creepy because theyâ€™ve come to realize Iâ€™m being serious. Which brings us back to the point of this being good news for me. I am a big fan of mecha, giant robots and steampunk titans, or whatever you want to call them. I ordered the book and waited for our benevolent overlords at Amazon to deliver my loot.

Upon receiving my book I dug into it with fevor and below is my initial take away of the book.

The first few chapters discuss a couple who we first meet in the US Japanese internment camps. They progress to give the understanding that the US suffered a mortal blow during WWII from the Japanese when they deployed a massive mecha that was armed with nuclear weapons (atomics, in their parlance) to California, breaking the back of the American spirit.

The story then has a forty year timeskip and you meet their child, the now Captain, Beniko â€œBenâ€ Ishimura. Ben is a nihlistic middle aged man who works for the Bureau of Censorship within the United States of Japan, or USJ. Ben is swept up in the intrigue of the Tokko, the Japanese Secret Police, as they investigate a radical rebel cell of American Revolutionaries, the George Washingtons.

The George Washingtons have released a video game designed to subvert Imperial Japanese rule in the USJ. Ben, along with a mildly sociopathic Tokko agent, named Akiko Tsukino, wind up being drawn along an ever more dangerous road while they try to track down these dangerous rebels, find the source of this proscribed  and find out what the George Washingtonsâ€™ real plan is.

The book climaxes in a rapid chain involving the following events: a life and death stake video game match, a giant robot battle, a cyborg assault and a final desperate escape in the midst of a full on rebel attack on the empire. The last few chapters were an immense whirlwind of violence and daredevil, enough to satisfy any action junkie. Howeverâ€¦ I walked away unsatisfied.

From the beginning of the book to the end of the book there had been only two giant mech battles, the first of which was just over 200 pages in, and I felt like Iâ€™d been sold a bill of goods. Not to say that I felt the book was bad, but it wasnâ€™t what I expected, nor what Iâ€™d been wanting. I figured in the end, Iâ€™d have actually enjoyed it if I hadnâ€™t walked in the with the preconception that the mecha on the cover had substantive value to the story. As it was though, I was a little bit bitter and somewhat unsatisfied with the book, but still enjoyed the depth of the setting and the vibrance of the story.

Fast forward a year, and small change, Iâ€™m laying in bed browsing Reddit, because you know, I have no respect for myself or my time. I see an add for Mecha Samurai Empire Empire. Now, normally I dismiss all adds out of hand and have a general distaste for the advertisement industry, but this happened to catch my eye. Mostly because it said it was from the author of United States of Japan but obviously, having â€œMechaâ€ in the title certainly didnâ€™t hurt it’s chances any.

I look it over, decide, â€˜what the heck,â€™ and tell Amazon to ship the book to me. Now, I ordered it late Thursday, so I knew Iâ€™d be Monday or Tuesday before it arrived. As such I decided to re-read USJ, itâ€™d been a year and several dozen books sense I read USJ last and my memory was fuzzy.

This time through, I went into the book with the distinct knowledge it wasnâ€™t a mecha novel. That made a pretty big difference. The story had not changed at all of course, but freed from my previous expectations I was able to enjoy it for what it was, rather than complain about what it wasnâ€™t.

That being true, I found I actually kind of appreciated the struggle of Ben, a man with seemingly low aspirations, as he worked to find his way balancing his life between the honor of his society and the echoes of a past that only the horrific corruption of the most authoritarian societies could have created. Akiko was likewise a substantively more interesting character, a woman with notable sociopathic traits who had a patriotic bent and belief in the infallibility of the emperor that more than just borders on religious zealotry. I wouldnâ€™t be friends with either in real life, but they were fun to read about.

The characters, the society and the world in general are broken and flawed. Moreover, there is a pervasive note in the background that warns against blind faith in the state and warns of the horrors that the unrestricted rule of that state can inflict. On the other hand, the characters work with blood and sweat (but mostly blood) to redeem themselves and the world around them.

And honestly, Akiko was way more badass of a character than I remembered her being. Psychotic and savage, sure, but still a badass.

Peter Tieryas has crafted a solid world, and characters that were over the top in the absolute best (and most horrifying) of ways. There is a distinct difference between the USJ as imaged by the author and the real US, it has its own notable culture, lingo and problems. The book isnâ€™t particularly morally uplifting (it is kind of a depressing world), but it is a lot of fun. It starts off with the characters investigating rebels and builds up to one action sequence spilling into the next by the end. If you enjoy anime inspired sensibilities and a bit of grimdark in a setting, this is a solid entry for your library.

September 2018 Rage of Bahamut wallpaper release:
(Too Much Oppai? I’ll let you be the judge)

The August issue is finally out! It might be September but it was released on the 31st.