A review of Mecha Samurai Empire by Peter Tieryas

The second reading of USJ gave me pretty high anticipation while I waited for Mecha Samurai Empire to arrive in the mail. My appetite had been effectively whetted and I was looking forward to another story in the setting. The former disappointment over a lack of giant robots was replaced with excitement to get another look into the underbelly of a corrupt imperial colony.

Let it never be said that Peter Tieryas has an inability to subvert expectations. 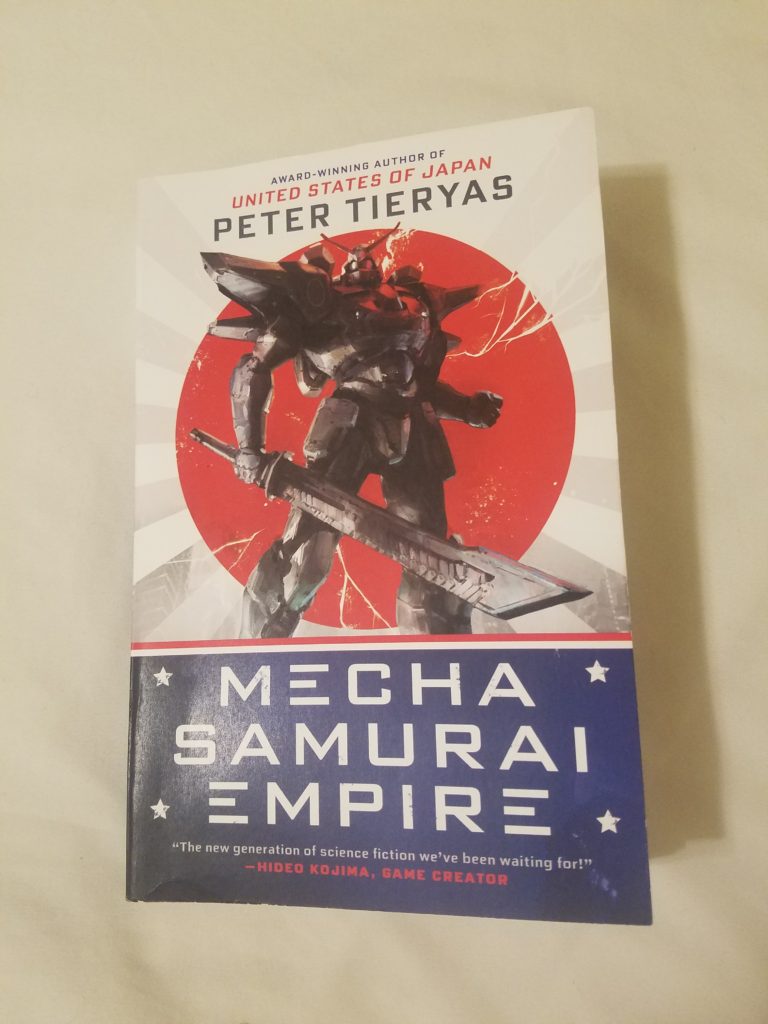 Mecha Samurai Empire is not a story of navigating intrigue in an animesque (and somewhat lighter) take on Warhammerâ€™s Imperium of Man, as its predecessor was. No, rather, it is a coming of age story for a boy who wants to be a mecha pilot.

Forgive me, if the title of the story makes it seem obvious I should have expected a larger focus on mecha this time. I had been once burned before with high hopes for a swashbuckling mecha adventure, and was determined to avoid disappointment this time. I figured that the story would be more or less thematically similar to it’s predecessor and was prepared to accept the fact that I would see little of the titular robots. I approached the book with what I thought was an open mind. Then the story slapped me in the fact by being exactly what it claimed to be. I have to admit I was a little bit peeved to have been burned a second time in my expectations.

My own inability to set proper expectations for this author aside, let us look at the actual subject of the review, Mecha Samurai Empire:

The second book in the USJ setting, the book can be read as a stand alone, with no prior knowledge of the setting. This book is following a new protagonist, Makoto â€œMacâ€ Fujimoto. While reading United States of Japan first will ensure you have more familiarity with the world and allow you to enjoy the cameos of characters from the first book there is no need for you to read it before you read Mecha Samurai Empire.

The book opens with the trials and tribulations of Mac and his friends, the beautiful transfer student Griselda, and his best friend Hideki, as they go through the all important high school placement tests. Because, of course, as we all know, teenagers make for the best Mecha pilots and some tropes are so powerful they cannot be ignored (for this same reason the poor boy is also an orphan; the burden of heroes is truly a great one). Mac is understandably nervous leading up to the tests, being nether brilliant, nor a particularly physically gifted specimen of a young man.

However, while this might sound like a harmless setup for a young hero, the story follows a path that is far more apt for the setting. Mac soon finds himself with blood on his hands due to his own inaction. The shock of the event leaves him depressed and listless. Moreover, he fails to place high enough in the exams to enter Berkeley, the military academy, he wanted to join. He drifts away from those closest to him.

While lurking in this funk he is confronted with further destruction, and he steps up and helps a young mecha pilot defend his city against the attack of American rebels. This marks the first of several satisfying giant bot brawls in the book. He shows enough potential that he gets the option to join a civilian lead defense contractor, that gives him slim hope of becoming a mecha pilot as heâ€™s always dreamed.

Taking ahold of this thin strand of hope he toils to make his dreams come true. He has to work hard, overcome his past, his own failures and scrape his way up, but he does it (Unlike protagonists in similar situations within the genre. [Yes Shinji, weâ€™re looking at you. Weâ€™re all looking at you. You useless sack of crap.]).

Mac builds friendships, learns and works hard. He sees his efforts start to pay off and you can see him start to grow as a character. However the setting (just as real life) will not allow him too much good luck and  his superiors use him and his fellow trainees as bait to draw out a group of radicals called the National Revolutionaries of America (NARA).

The confrontation between NARA and the trainees is bloody and while Mac distinguishes himself, he is left feeling adrift again. Before he is left to wallow in his self pity too long (Weâ€™re still looking at you Shinjiâ€¦), he receives a summons from the charismatic Colonel Yamaoka. The Colonel convinces Mac that the USJ needs the skills of young pilots such as Mac, especially considering the growing believe that the Nazis are supplying NARA and pushing the violent revolutionary group to more and more brazen and deadly attacks. The Colonel offers Mac a spot in the prestigious Berkeley Military Academy.

Mac of course accepts this gracious appointment. While at Berkeley he cements his skills, and makes new friends and allies. His experience and the work ethic he accepted and built into his core allow him to distinguish himself.

Not all is well though. The tensions between the Nazi held portions of the Americas and the USJ grow. Mac meets back up again with his highschool friend Griselda, and despite his protests that while she is German, she isnâ€™t like those Nazis. Despite Macâ€™s efforts to try to explain #notallnazis it rapidly becomes apparent that it isnâ€™t socially acceptable, or in the interests of his long term health to associate with any Germans (I canâ€™t begin to describe how much I giggled at the black humor of having a mostly unironic opportunity to use #notallnazis).

As tensions escalate Mac and his friends are able to earn their way into an elite group of pilots and are immediately put to work testing a new experimental class of mecha designed to combat the new superweapon class of Nazi biomecha. Here we see further development of the characters weâ€™ve just met and the ones that weâ€™ve followed through the story thus far. Unfortunately for the young group of pilots, their chance to prove their worth in defending the USJ comes much more rapidly than any of them would have liked.

The climax of the book is a very entertaining all out bloodbath of a confrontation between Nazi and USJ mecha forces. While the action throughout the book is quite good, this was particularly memorable. Shortly after the book comes to a mostly tidy conclusion, with just enough of a look at the looming clouds between the USJ and the Nazis to keep you looking forward to another novel.

While this book was still not what I expected, I cannot complain. It was a solid coming of age story within a well written dark (but not black) setting. The main character has to learn to overcome loss, betrayal and suffering. Hard work is praised and shown to be absolutely essential to making your dreams come true.

Maybe Iâ€™m being overly sensitive, but my biggest irritation in the book was a final impassioned speech from a character, that contained over idealized ideological statements. Most specifically, a statement that cites national borders and names (Like how you identify things.) as being barriers to the â€œnew world orderâ€ that character wants. The speech seemed at odds with the ethos of personal responsibility (including the decision the self same character makes immediately thereafter to stay and fight for the USJ, with a standing offer to be free of it)  and expectation of working for success in the book. That said, I wonâ€™t lose sleep over it. If the author was planning on subjecting the readers to overmuch idealized ideology in the future I think the setting would be less morally ambiguous and I doubt theyâ€™d have made the obviously potentially contentious decision to make the main characterâ€™s crush a literal Nazi (#notallnazis aside).

In the way of critique of the story itself, Iâ€™d say the main characters didnâ€™t quite have same breadth of motivational complexity as in United States of Japan in my opinion. Additionionally, as a whole Iâ€™d say it was a touch lighter in mood than its predecessor as well. Not saying that is bad, but it didnâ€™t quite achieve the same emotional gravatas for me. Additionally Iâ€™d day that the supporting cast wasnâ€™t quite as boldy distinctive as it was in the previous book. Iâ€™m not saying there werenâ€™t characters who were memorably extravagant in design, but they were a little more muted and there werenâ€™t as many. All told I feel there was less of an opportunity for the author to flex the muscles of his setting and show it off. I think that as a whole the extra depth I found in United States of Japan made it a slightly better read (even with its distinctive and greatly unfortunate lack of giant robots).

Overall, Mecha Samurai Empire was a fun read. I found it had good pacing, an entertaining story, and engaging action sequences. Critiques aside, it still had plenty of depth and the characters were entertaining and relatable. It opened the setting up to a new, major conflict and set the stage for both physical and moral conflict. If you donâ€™t mind an adventure minded coming of age story that took a couple queues from Neon Genesis Evangelion it is a solid read.

This entry was posted in Book Reviews, News, Reviews. Bookmark the permalink.